Excerpt from “Travels through Gujarat, Daman, and Diu“, soon to be published  in paperback by Adam Yamey, NOW available as a Kindle with the title “TRAVELLING THROUGH GUJARAT, DAMAN, & DIU” ( buy your copy:  here!) 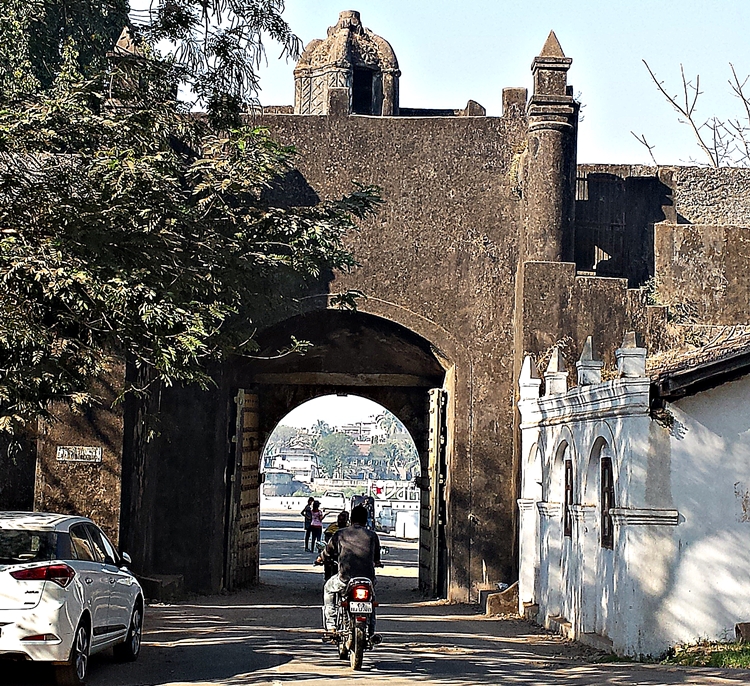 A kind man driving a three-wheeler van gave us a lift from the tea stall to the gate where we had begun our walk in Moti Daman. Speaking in Gujarati, in which my wife is fluent, he told us to wait for an auto where he dropped us. The sun was setting, and there was not much traffic. Eventually, an auto already carrying four large passengers stopped to pick us up. Two of the passengers moved to the front of the vehicle and squatted hazardously on either side of the driver, and we squeezed onto the narrow passenger seat next to the other two people. After a short distance, we stopped. The two men squatting beside the driver disembarked and walked ahead of us. We drove on, weaving our way around the barriers of a police check post, and then stopping again when we had passed out of sight of it. The two men, who had disembarked, retrieved their positions beside the driver, and we continued across the river to Nani Daman. The driver explained that the two men had had to walk ahead of us past the check point in order that the auto would not be stopped by the police because of being overloaded.

We disembarked at the bus stand and paid a small fare. We saw many taxis parked there. Painted yellow and black, they were old Ambassador vehicles, just like the taxis used to be in Bombay many years ago …