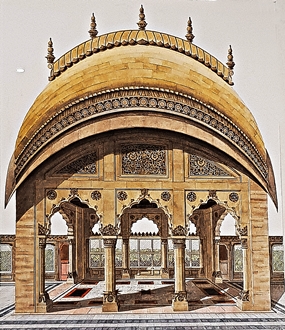 Varsha Bhatia, whose family originated in Kutch, trained as an architect in Bombay. Now, she has become a painter, specialising in water colours. Her delicately executed, finely detailed works display her appreciation of the asethetics of architectural masterpieces.

Following a recent visit to Kutch Mandvi, she has painted a pavilion that is perched on the roof of the Vijay Vilas Palace built by the Maharao of Kutch in a traditional Rajput style during the 1920s .

My wife and I visited this lovely palace during 2018. This extract from my book Travels through Gujarat, Daman, and Diu describes what we found:

“A notice on a wall near the main entrance reads: “Tides come and go but the legend here of sheer enchantment continues unabated”.  On entering the palace, we saw a large banner which exclaimed: “Welcome to palace and experience history which is housed within.” The walls of the pleasant rooms, filled with ageing furniture, are lined with photographs of the royal family, their guests including Indian and British hunters with their servants, alongside the spoils of the regular hunting parties, which used to be held in the palace’s extensive grounds.

Amongst the framed items hanging on the walls, we spotted a 500 Kori banknote issued by the Government of Kutch. It was printed with words both in Gujarati and English scripts. When the Emperor Jehangir (reigned 1605-27) met his vassal, Kutch’s ruler Rao Bharmal (reigned 1585-1631) in Ahmedabad in 1617, Jehangir gave Rao Bharmal the right to strike his own coinage. Thus, the Kori was born. It remained in continuous use in Kutch until 1948, when Kutch became part of the Republic of India.

The windows at the back of the palace look out over formal gardens with dried up water features including a slender stone-lined channel running between bare rectangular patches of ground and fountains. We climbed a spiral staircase to reach the roof of the palace and wandered amongst the domed pavilions with jali screens covering their windows. Another spiral staircase, made of cast-iron, leads to an elevated viewing platform covered with a large domed ceiling supported by pillars. From here, we had a wonderful view of the countryside surrounding the palace and the Arabian Sea.“

It is this ‘viewing platform’ that is illustrated in Varsha Bhatia’s lovely water colour work.

“TRAVELS THROUGH GUJARAT, DAMAN, AND DIU” by Adam Yamey

is available as a paperback from lulu.com, Amazon sites, and bookdepository.com.

There is also a Kindle edition.