A short article about the Nawab of Junagadh, who fled from India to the newly formed state of Pakistan soon after 1947. He was a keen dog lover, but this was to be the cause of his demise… 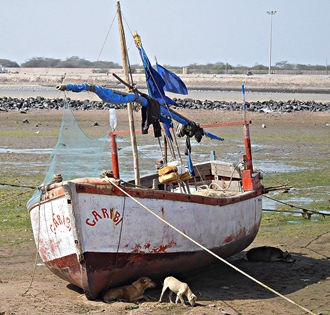 The picture shows dogs resting in the shade provided by a beached fishing vessel in the estuary of the River Rukmavati at the town of Mandvi in the former Kingdom of Kutch, now part of Gujarat.

Nearby, there were many similar fishing boats, all manned by Muslim seamen. These boats sail into the Gulf of Kutch, a piece of water that separates most of Kutch from another part of Gujarat, Saurashtra (or Kathiawad).

The vessels are allowed to sail as far west as Okha, but no further as they would then stray into Pakistani water. We were told that there is quite a good deal of smuggling between the Indian and Pakistani fishermen. The Indians have to be careful because they might be arrested in Pakistani waters, as a recent newspaper report  reveals:

Attari-Wagah border after the Pakistan government released them from jail as a goodwill gesture.

The fishermen crossed over to India  this evening on the basis of ’emergency travel certificates’ issued by the Indian High Commission in Islamabad, officials said.

Immediately after the repatriation, a medical examination of all the fishermen was conducted, they said.

The neighbouring country had released the first batch of 100 Indian fishermen on April 7.

The fishermen were arrested for fishing illegally in Pakistani waters during various operations.

Both the countries frequently arrest fishermen as there is no clear demarcation of the maritime border in the Arabian Sea and these fishermen do not have boats equipped with the technology to know their precise location.”

Sadly, India and Pakistan are fighting again. Some parts of Gujarat, such as Kutch, are perilously close to Pakistan.

“We boarded a smallish propeller aeroplane, a Bombardier, which serves the daily flight from Bombay in Maharashtra to Kandla in Kutch.

Our one and a half hour Spicejet flight headed north west from Bombay. After traversing Saurashtra, the southern peninsula of western Gujarat (also known as ‘Kathiawad’), we flew over an area of rivers and marshes, and begun descending towards the airport of Kandla in Kutch.

Many centuries ago, Kutch was an island between Gujarat and Sindh. It was separated from the mainland by rivers along its northern and eastern edges, and the sea along its southern edge. The rivers disappeared after a series of seismic disturbances, only to be replaced by arid rocky deserts, the Ranns of Kutch. Until the 1940s, Kutch was fiercely independent of the rest of the Indian subcontinent. Despite frequent attacks by its neighbour Sindh (now part of Pakistan) and the Mughals, the Kutchis retained their autonomy. One of the reasons we were visiting this outlying part of India, now incorporated within the State of Gujarat, was to visit the area from which my wife’s mother’s ancestors originated. Another reason was that we had heard that it is beautiful.

Kandla airport is small. As we descended from the ‘plane onto the tarmac, I noticed that our aircraft was surrounded by army men holding loaded machine guns, their muzzles pointing downwards. There were numerous signs forbidding photography because this airport is primarily a military base only 133 kilometres from the Indian border with Pakistan. There was no baggage conveyor belt system. The luggage from the ‘plane was brought to the tiny terminal in wagons from which we had to help ourselves to our bags.”

This is an excerpt from “TRAVELS THROUGH GUJARAT, DAMAN, AND DIU” by Adam Yamey. It is avalable on Kindle and as a paperback from lulu.com, bookdepository.com, and Amazon.