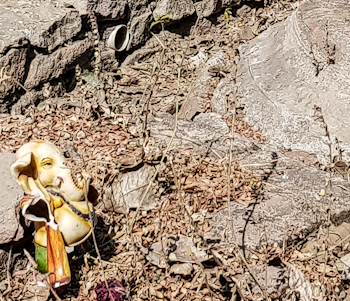 One Tree Hill Garden is a luxuriant little park on the shore of Kankaria Lake in Ahmedabad. At one end of the park, there is a small graveyard. The graves, which date back to the 17th century, mark the final resting places of some of the Dutch folk who worked in the trading post that the Dutch East India Company established in Ahmedabad at that time.

The graves are crumbling and most of them have lost their inscriptions. A few stones bear the incomplete remains of now barely legible inscriptions.

In about 2000, a Dutch foundation constructed several attractive Islamic looking concrete shelters over some of the gravestones.

I noticed that someone had placed a plastic model of the Hindu deity Ganesh next to one of the dilapidated graves. We showed this to a couple of the garden’s workers, one a Hindu and the other a Muslim, and mentioned that this is a Christian grave.

The Hindu gardener said that whoever had put the Ganesh there had good intentions, but did not understand what he was doing. My wife said that it did not matter because all people respect the same God and Hindus include Jesus as one of their own. The Hindu nodded in agreement. The Muslim looked doubtful.

The Muslim gardener was reassured when my wife suggested that Christianity and Islam share some common roots.

As we left these two fellows, my wife said she could hardly imagine having theological discussions with gardeners in a public garden in England.