Inspired by seeing camels in Gujarat… 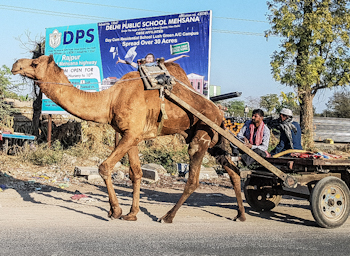 While travelling through Gujarat in western India, I have seen many camels (? dromedaries) working as beasts of burden. They are well suited to the arid semi desert climate of Gujarat. The camels remind me of airline jokes I learnt in my childhood. Each joke gives another meaning to an airline’s name or acronym.

The Greek company Olympic became Only Like Your Money Pay In Cash;

And this brings me to humped beasts of burden.

BOAC, which was British Overseas Airways Corporation, became Better On A Camel.

When the petroleum company ESSO first became established in India, workers in Indian companies worked half day on Saturdays. Esso workers got a whole day off on Saturdays. So, ESSO became known…