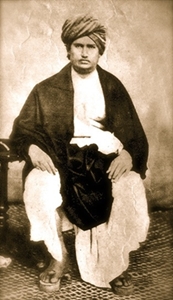 Here is an excerpt from my latest book, “IDEAS, BOMBS, and BULLETS”, which deals with the activities of Indian patriots (including Shyamji Krishnavarma, VD Savarkar, Madame Cama, Madan Lal Dhingra, and VVS Aiyar) in Edwardian London between 1905 and 1910 and what inspired them. The excerpt deals with an example of the ‘Ideas’ part of the book’s title. It is concerned with aspects of the life of Swami Dayanand Saraswati, a reformer of Hinduism who was born in Gujarat.

Swami Dayanand Saraswati (‘Dayanand’; 1824-83) was an influential reformer of Hinduism and the founder of the Arya Samaj movement. He was born in Tankara, which is now in the Morbi district of the State of Gujarat. To escape from a forced marriage in childhood and disillusioned by his family’s slavish Hindu devotional practices, he wandered around India as a sannyasa (religious mendicant) for well over a decade.  During this period, he met and became a disciple of Virajanand Dandeesha (1778-1868), who was a scholar and teacher of Sanskrit and the texts of the Vedas. Dayanand promised Dandeesha that he would devote his life to the renaissance of the Hinduism of the Vedas. Dayanand rejected Hinduism of the Puranas and other later texts and became convinced that the ‘pure’ Hinduism as found in the Vedas was the only true form of the religion. He wanted to purify Hinduism by stripping away modifications introduced after the texts in the Vedas were received from Heaven. In 1875, Dayanand published his book Satyarta Prakash (‘Light of Truth’), which expounds his beliefs. Banned in some parts of India when it was published, it contains some quite inflammatory material. Dayanand believed that God is the:

“…eternal source of all knowledge and he reveals it through the Vedas…”, and that  is because the Vedas are the sole source of knowledge, all other religions are imperfect. His book contains chapters, which seek to prove that religions apart from pure Hinduism, based solely on the Vedas, are fatally flawed, and therefore to be avoided. Dayanand’s arguments against other religions are based on literal interpretations of selected texts from holy books, such as The Bible and The Koran, without appreciating or admitting that what is written in these texts should not be interpreted literally.

According to Dayanand, the arrival of the Aryans into India (now a subject of some contention) marked the start of a ‘Golden Age’. He wrote:

“In the ‘Golden Days’ of India, saints and seers, princes and princesses, kings and queens, and other people used to spend a large amount of time and money in performing and helping others to perform Homa; and so long as this system lasted, India was free from disease and its people were happy.”

This Golden Age had long passed because, putting it simply, Hindus had modified and ignored the teachings in the Vedas. However, he believed:

“It can become so again, it the same system were revised…”, by which he meant if Hinduism were to be reformed and people returned to a strict adherence to the Vedas, the ‘Golden Age’ would be revived.

Dayanand blamed the decline of India and its subjection by various invaders to the deviation of Hindus and their religious leaders from the practices advocated in the Vedas. He wrote:

“The causes of  foreign rule in India are:- mutual feud, differences in religion, want of purity in life, lack of education, child-marriage, marriage in which the contracting parties have no voice in the selection of their life-partners, indulgence in carnal gratification, untruthfulness and other evil habits, the neglect of the study of the Veda, and other mal-practices.”

The Sawmi believed that the advances of the Europeans that allowed them to conquer his India was due to their avoidance of things that had contributed to the downfall of Hinduism. The conquerors’ successes were in his opinion due to their valuing the following: good education; willingness to sacrifice everything for the good of their nations; not imitating others blindly; obeying superiors; helping their fellow countrymen with trade; and not being lazy. Absence of these characteristics, which Dayanand believed to be beneficial for the success of the British, contributed, in his opinion, to the downfall of India. Furthermore, deviation from the Vedas added to his impression that India lacked the ‘superiority’ he detected amongst the British and other Europeans.

In 1875, Dayanand formed the Arya Samaj (‘Aryan’ ‘society’). Its objects were: to promote Dayananda’s version of reformed Hinduism (based only on the original, unmodified texts of the Vedas);  to counter attacks on Hinduism made by Christians and members of other religions; to convert back to Hinduism those who had been converted to Islam and Christianity; to reinterpret caste by allocating people into a caste according to their merits rather than by accident of birth; and to promote the idea that the Vedas contained the original plans for what were regarded as modern inventions. As an example of the latter, he wrote:

“… that Krishna and Arjuna went to America in an Ashwatari vessel (i.e., one propelled by electricity) and brought the sage Uddalaka back with them …”

“IDEAS, BOMBS, and BULLETS” by Adam Yamey may be bought here:

And (in India only):

One thought on “Swami Dayanand Saraswati”