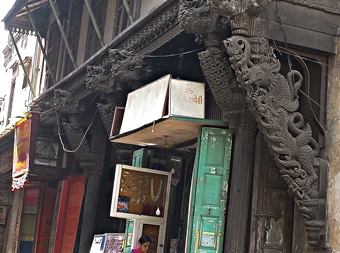 The old part of the city of Ahmedabad is divided into self-contained districts, like gated communities, called pols. Each pol has its own single gated entrance which gives sole access to a number of narrow streets. The narrow streets are lined by tall buildings, which together render the temperature of the pols at ground level far lower than the temperature in wider streets and open places in the city.

In times of trouble and strife, the gates of a pol can be closed to prevent intruders entering it. Secret passages lead from one pol to its neighbour(s). Pols have their own wells.

Often a pol is inhabited by families that have something in common, for example religion, caste or profession.

One of the many delights of the pols in Ahmedabad (they are also found in Baroda) is that they often contain buildings decorated with intricately carved woodwwork decorative and stuctural features.

For tourists, a pol is not only a place that they can literally ‘chill out’ but also they can experience a valuable part of Ahmedabad’s living history.