Sand drifts relentlessly up from the seaside towards the gracefully decaying, rambling Huzoor Palace in Porbandar (Gujarat), the birthplace of Mahatma Gandhi.

Prior to 1947, what is now the State of Gujarat was divided up into more than 200 ‘independent’ Princely States. Many of the rulers of these states were wealthy. Most of them built elaborate palaces like this one built in the early 20th century by Nawarsinhji Bhavsinhji Sahib Bahadur, who ruled from 1908-48 and was a first-class cricketer, who played for India in a Test Match in England in 1932. 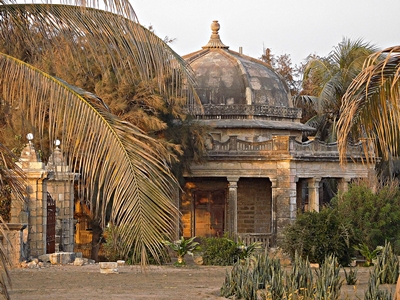 Discover more about Gujarat in

“TRAVELS THROUGH GUJARAT, DAMAN, AND DIU“

Also, from Amazon and on Kindle